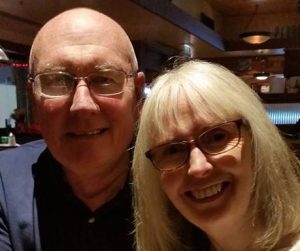 I was born in Glasgow in 1951. I was “christened” as a baby in the Church of Scotland. My earliest memories were of living in a tenement building and playing out in the back yard with other kids, sometimes amongst what my mother called the “midden” or dustbins. My parents wanted a better life for me and my little brother Iain so they applied to get a house in the New Town of East Kilbride. We moved to East Kilbride in early 1957 into what I thought was a palace in comparison with the grubby tenement I was used to. The house was a 3-bedroomed end-of-terrace with front, back and side gardens. Wonderful.

My parents were what I would call nominal Christians. They joined the South Parish Church of Scotland in the Murray area of East Kilbride. They would attend church infrequently although I was made to go to Sunday School every Sabbath day. I remember hearing the stories from the Bible and being fascinated by stories of Noah, David and Goliath, Samson and many others and of course the miracles of Christ from the New Testament. My mother gave me a Bible when I was quite young although I never ever heard anyone say to me that I needed to trust in Jesus personally to get to heaven. I just thought he was God’s Son and came to show us by his example how to live our lives.

Tragedy struck our family when my brother Iain was killed after being hit by a lorry at the age of 4. I was 6 at the time. Even as a child I knew I wouldn’t see him again on this earth but I accepted that he had gone to heaven and I would see him there some day. My parents were devastated and I don’t think they ever fully recovered from his death. They stopped going to church although I continued to be sent to Sunday School. I joined the church organisations, the Life Boys and later on the Boys’ Brigade. I enjoyed it but when I was in my mid-teens (about 14) I stopped going. It wasn’t “cool” to go to church-based things. I would rather just hang out with my friends, play football and listen to the Beatles or the Rolling Stones.

At the age of 16 I left school and managed to get a craft apprenticeship with Rolls-Royce in East Kilbride. I had no interest in church as I considered it irrelevant to what I wanted as a teenage boy: following Rangers, playing football, going to the disco with my pals. Trying to get a girlfriend! When I had just turned 20 I met Janice who became my wife 2 and a half years later.

Janice and I wanted an adventure and as Australia wasn’t an option at the time we were accepted to emigrate to South Africa. I was quite naïve then and didn’t really consider the Apartheid situation as it was at that time. We arrived in Cape Town in early summer 1975 and were met by an immigration official who told me if I didn’t find a job in Cape Town within a few weeks he would send me to Johannesburg. I found a job within 3 days and we eventually got a nice flat to live in. I have 2 sons: Stuart who was born in Scotland and Gary who was born in Cape Town. At this point Janice and I were not saved or had any interest in going to church although we had taken our marriage vows in a United Reformed church in East Kilbride.

Still not having any real interest in church, I was working as a machine-shop inspector in Cape Town. A young black man named Melvyn came to work alongside me. I was to show him what to do in relation to the job. He was a Christian and he told me that I needed to be born again and receive Christ as my Saviour. At lunchtime he would go off and pray with a few other believers in the factory which I found strange. I knew he was telling the truth and although I believed that Jesus had existed I had never received Him PERSONALLY as my Saviour or ever repented of my sins. I was afraid that should I die God would cast me into Hell. Melvyn kept on encouraging me to trust in Christ but I was afraid that others would ridicule me if I became a “real” Christian.

Under conviction of sin, one day in late 1977 I was standing on the shop floor doing checks. Suddenly an overwhelming sense of the majesty and holiness of Almighty God gripped me. If I’m honest I was having a similar experience that Isaiah had in chapter 6 of his book. I was seeing myself for the first time in my life as a vile, unclean creature before an infinitely holy God. Not only that but it was as if I was enveloped in a bubble and as I looked round about me at the workers, God was saying to me that they were unclean just like me (Isaiah 6:5). I had to get alone. I walked off the shop floor into the toilet and shut the door. I found myself with tears running down my face asking the Lord to forgive my many sins and cleanse me in the blood of Christ. A tremendous outpouring of God’s Spirit flooded into my soul and the next thing I was thanking Jesus for saving me. I eventually emerged from the toilet and as I walked out the first person to meet me was Melvyn. He looked at me and said, “Brother, your face is shining, you’ve been with the Lord!” I embraced him and we were both rejoicing in the reality of our common salvation. People were giving us strange looks.

I went home and told Janice what had happened. She didn’t understand of course but when I started going to church she came along with me with the 2 boys. It was a good evangelical Methodist church and as I and others continued to pray for her she got saved in June 1978. I felt we were now complete as a family as we were one in Christ. My conviction at that time was to receive believer’s baptism. And so in March 1978 I was baptised by full immersion in the sea near Cape Town. Later on as I studied God’s Word, I changed my view on baptism and embraced covenant theology more fully.

Space won’t allow me to speak of our return to Scotland in 1979 and long years in between. My testimony is that the Lord has persevered with me graciously since he saved me over 39 years ago. Sadly my wife died in July 2011. But the Lord has brought Lesley into my life who is a godly Christian lady, and we married in 2017.

To God be the glory 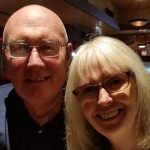 Intro: I was born in Glasgow in 1951. I was “christened” as a baby in the Church of Sco...
Testimony of Ronnie MacDonald
View All